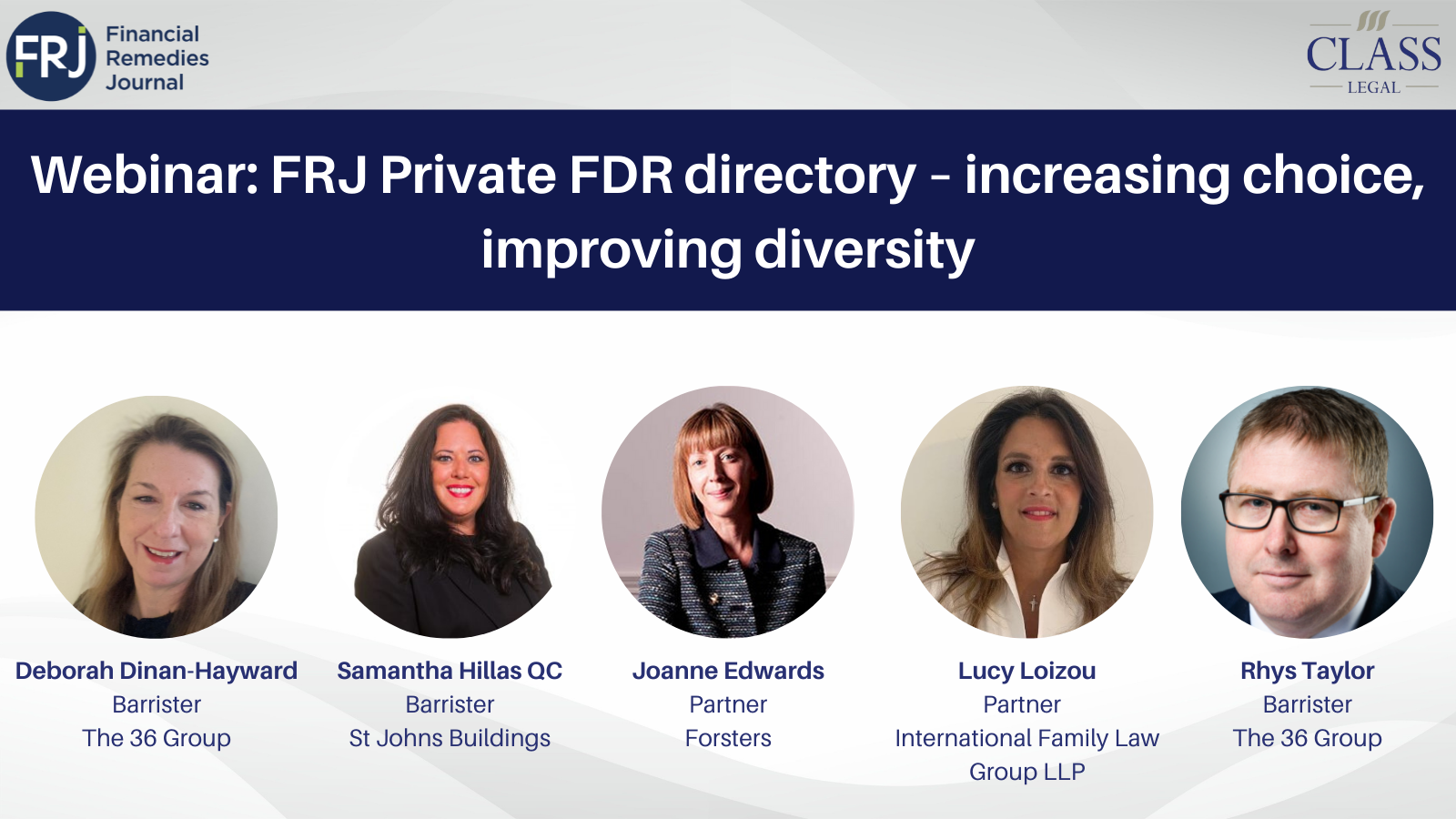 The Financial Remedies Journal website launched in March 2022 and offers the first national Private FDR evaluators directory. Practitioners who wish to act as private evaluators can post their details on the site which the FRJ hopes will, in time, create a national database of private tribunal practitioners. It is very much hoped that this facility will help meet the well-made criticism that too often, private tribunal shortlists are not sufficiently diverse. The PFDR directory editor, Deborah Dinan-Hayward, hosted a panel discussion on the 15 March 2022 at 17.00 to discuss the need to encourage diversity in private tribunals and to explain how the directory is intended to work and how you can add your details.

Deborah is a Matrimonial finance and Tlata barrister and arbitrator at 36Group with particular expertise in high net-worth and complex financial remedy cases, most involving companies and/or farms. She is a member of the Farquhar Committee and sits as a civil and family Deputy District Judge on the Western Circuit. Deborah was called to the bar in 1988. She is also a Private FDR evaluator and the Directory Editor of the Financial Remedy Journal.

Sam Hillas QC is a senior member of the matrimonial finance team at St John’s Buildings based in Liverpool and dealing exclusively with financial remedy work. Commended by Chambers and Partners and Legal 500 as a “charismatic and client-friendly advocate” who “works like a Trojan”, Sam routinely acts in complex cases, especially those involving marital agreements, trusts and corporate structures, cases involving non-disclosure and Schedule 1 Children Act claims. She is a IFLA qualified arbitrator and acts as an evaluator for private FDRs. Sam played prop for a number of years (Saracens, New Brighton, Birkenhead Park, Cheshire) and now sits as a judicial chair for the RFU, Six Nations and World Rugby.

Jo is a partner and Head of Family at Mayfair firm Forsters LLP. She specialises in financial remedies on divorce for high net worth couples, both in the context of complex litigation, often with an international element, and in her mediation practice. She also has extensive experience in children work. A former Chair of Resolution, Jo heads its Family Law Reform Group and in that role has lobbied for law reform, given evidence to parliamentary committees and has featured extensively in broadcast and print media. She is currently involved in the Fair Shares project and working with various not-for-profit organisations on the Parents Promise initiative.

Lucy Loizou is a Partner at the International Family Law Group LLP.

Lucy became Managing Partner on 1 August 2021. Lucy undertakes complex financial cases often involving an international element. She has worked on a number of cases involving high net worth issues. Lucy advises clients with difficult corporate interests and has much experience in dealing with financial cases involving foreign trusts. She handles several Cypriot and Greek cases advising on the impact on issues under English law. She has become the “go to” lawyer in the Greek and Cypriot community in London.

Rhys Taylor is a barrister at The 36 Group and 30 Park Place. He is a member of the Family Procedure Rule Committee, the Pension Advisory Group and the FLBA national committee. Rhys is a Recorder, arbitrator, mediator and a neutral/evaluator in the private FDR setting. He tweets @RhysTaylor32.