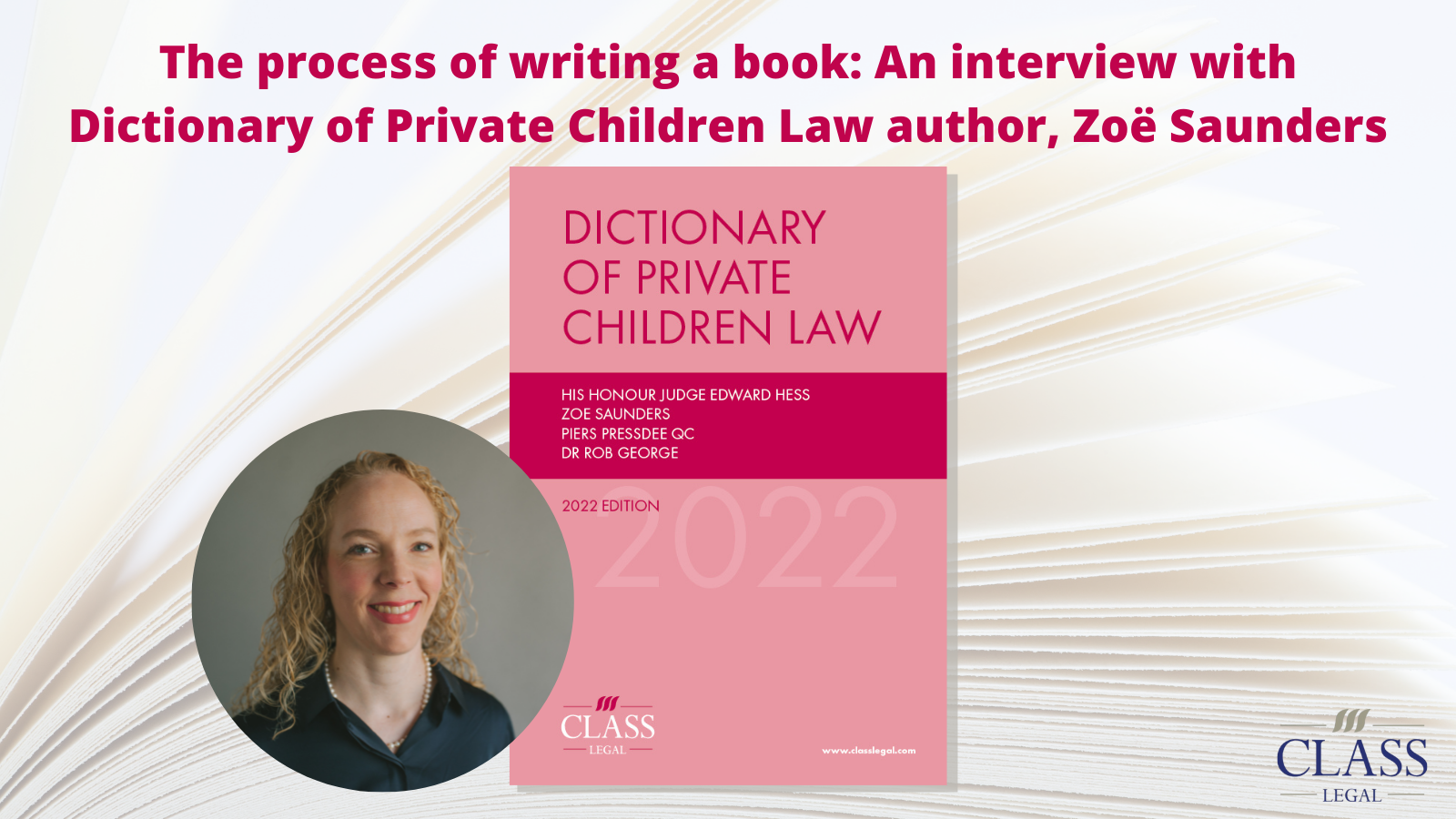 The process of writing a book: An interview with Dictionary of Private Children Law author, Zoë Saunders

How did you come up with the idea for Dictionary of Private Children Law?

How did you fit it in with your practice?

I plucked up the courage to ask the question of HHJ Hess during the early days of the pandemic when I thought (feared?) I would have a lot more time on my hands and so I didn’t see writing time as a problem. The actual time management of writing became a much more significant issue than I had anticipated at the start, but I dealt with it by setting myself a fairly strict timetable of writing a certain number of chapters per month. I tried not to do it all at one time to make it a bit more manageable and to keep it more fun. I did have to ask my clerks to set aside days when I was particularly busy, but at other times I just fitted it in when cases settled or went short for other reasons.

The blank sheet of paper is the most difficult bit. I found that on the whole once I had started writing each chapter it became much easier. Sometimes I would write down pretty much anything to get me started and then once it started to flow the initial paragraph would often be deleted. There was obviously a lot of cross-checking legislation reference and cases, but I tried to write as much as possible and then come back to cross-check things after I had done most of the writing. It is much easier to add things in a tidy things up when you have left it for a bit and come back to it. I found if I tried to do too much at once it just felt onerous.

Do you have any useful tips for anyone else who would like to write a book?

Keep it practical: write a book that you would want to read. If you have a broader audience in mind, then keep them in mind as you are writing. Think: will this be helpful? Is this clear enough or should I add more explanation?

Find good co-authors: especially as a first-time author I have been hugely lucky to have such talented co-authors. It is really helpful to have other people to bounce ideas off and to cross-check your work. It also helps to keep you accountable, especially to deadlines.

Give yourself enough time: it is really important to keep it manageable, especially if you are trying to fit it in around other things. Taking it one chapter at a time rather than trying to do too much at once. Initially I tried to write a lot of chapters in a day, but I lost focus and ended up deleting a lot of what I had written, so taking it one step at a time is much better.

Have a good structure: we had it pretty easy because the dictionary structure really helps to keep you focussed. I think a word count is also good as it stops you from writing too much. As with any writing keeping it simple is usually better.

Go for it: I was nervous about proposing the DPCL because I wasn’t sure it would be accepted, but I have been really pleased by how many people have commented on how useful it is and I wish I had suggested it earlier. I would definitely encourage any would-be authors out there to have faith in their ideas and go for it!

The Dictionary of Private Children Law is a unique reference guide to the key concepts, cases, and practice of private children law. Its A4 format and targeted concise content makes it a unique model of accessibility and portability.

This 2022 edition is fully updated to include changes and developments in the law from the last twelve months.