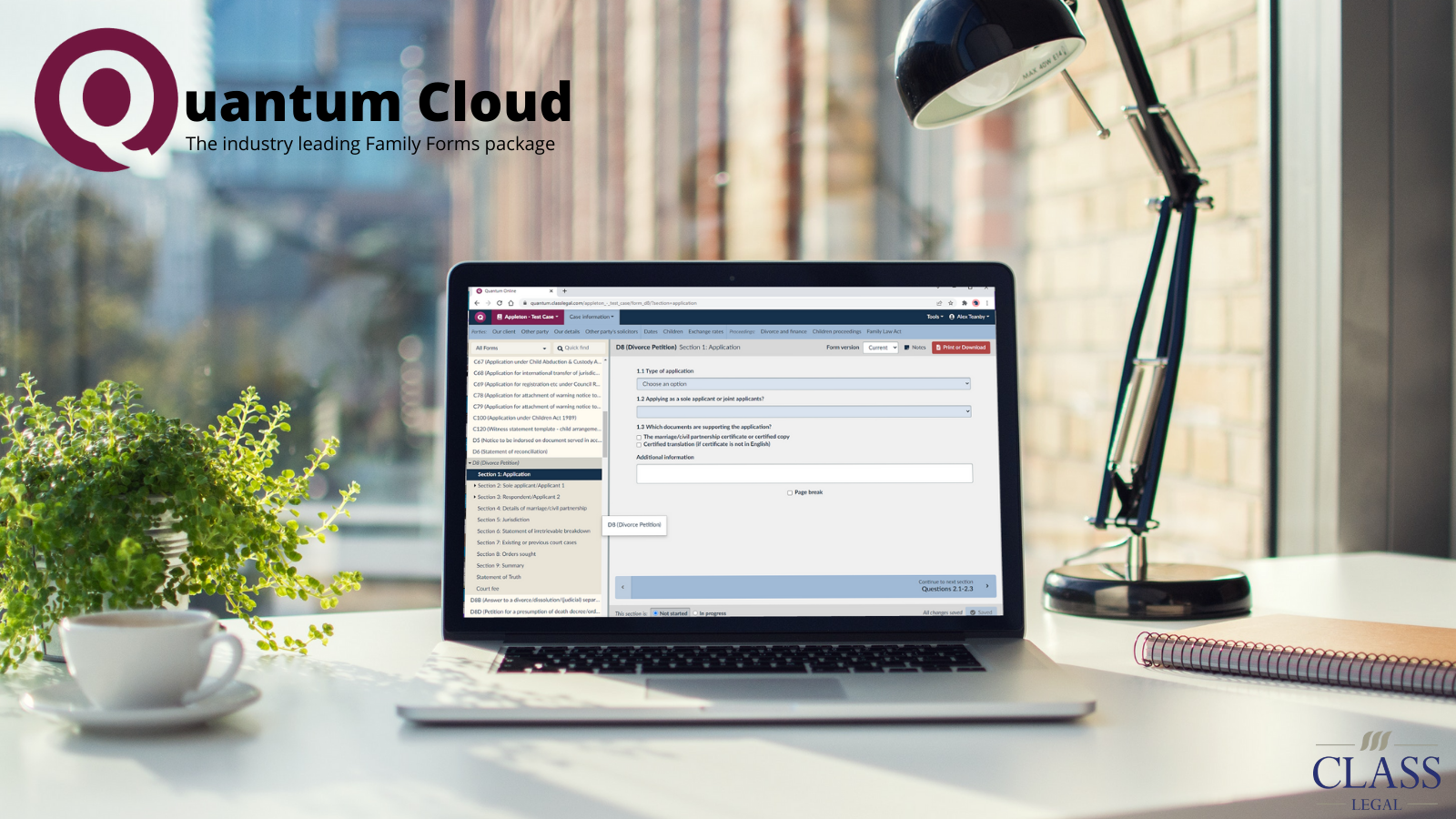 Quantum and the Divorce, Dissolution and Separation Act 2020

As you’re no doubt aware, the DDSA 2020 is now in force. We wanted to let you know how it will affect you as a Quantum user.

1. Instances where you will need to complete new divorce forms within Quantum (as opposed to online)
As before, in the majority of cases, divorces will continue to be applied for using the digital application process.

There are some instances where the paper application process (where you would therefore complete the forms within Quantum) either can or should be used. See the MoJ’s Information Pack for full details. The MoJ have also published an update (Click Here) to the pack. Further information may be published by the MoJ which you should look out for.

2. Cases which started with a petition issued before 6 April 2022 will continue under the old rules for the divorce/civil partnership dissolution/(judicial) separation
Although from 6 April 2022 all submitted applications (no longer petitions) for divorce (etc) will proceed according to the new rules, cases with a petition already issued under the old rules will continue under those old rules.

For some time therefore, Quantum will contain two versions of many divorce forms (the exceptions being where forms are a new addition under the new rules (e.g. D36A), or discontinued (e.g. the D80 variants).

It is crucial you ensure you are using the correct form version for each of your cases, depending on whether a petition or application was issued.

For example, when you want to complete a D36, if your case started with a divorce application issued on or after 6 April 2022, you need to use the current version of the form, which Quantum will always default to. See the Form version dropdown on the top right of the screen:

If however your case began with a divorce petition issued before 6 April 2022, you need to click on the dropdown arrow and select the previous version of the form.

3. The order and timing that new forms will appear in Quantum
As stakeholders, we were given draft revised versions of some of the key divorce forms a few weeks ago, and we have been working on them.

However, the final versions were only released at 10am on 6 April 2022, and of course we need to check for any changes from the draft versions.

A whole raft of other revised and new forms were also released at 10am on 6 April, which we have had no prior sight of. These include revisions to various financial forms (including Form A, Form A1, D11 and D81). In total, there are 22 either revised or new forms due to the DDSA 2020.

We will work on and release the forms into Quantum in the priority order we think they are used.

We hope that there will be very few, if any, instances where you need to use a revised form in Quantum and it is not available (such an example might be if you need to complete a paper application for nullity today!).

For the divorce forms, we will prioritise those at the start of the application – e.g. as a conditional order under the new rules cannot be applied for until 20 weeks after the application, we will not work on the revised D36 and new D36A immediately, but ensure they are available well before they can be used.

The revised financial forms will have a transition period (likely to be a month, though at the time of writing not announced) during which the old versions can still be used. We hope to have all these revised versions into Quantum within a week however.

Check the Form/order update information screen (accessed under your user name on the top right of the screen) to see which new/revised forms are currently in Quantum,.