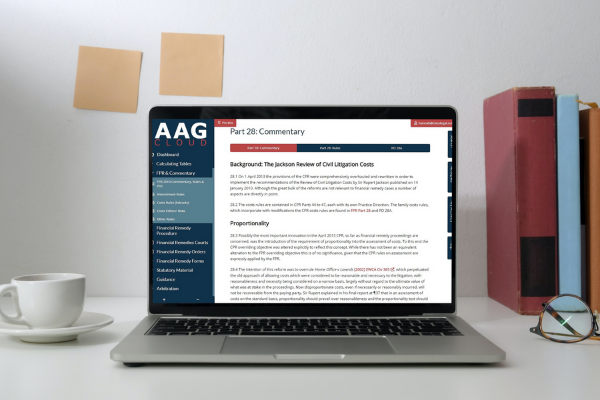 'In OG v AG [2020] EWFC 52 the time came, relatively late in the proceedings, when the husband had made a sufficiently clear disclosure to trigger the wife’s obligation to openly negotiate reasonably. She did not do so. She continued to seek a disproportionately unequal division of the matrimonial property in reliance on the husband’s deficient disclosure.'

The below extract is taken from AAG Cloud, and includes Commentary on the duty to negotiate openly.

28.52 In an important development, on 27 May 2019 ¶4.4 was augmented. The full paragraph (with the additional text in italics) now reads:

‘In considering the conduct of the parties for the purposes of rule 28.3(6) and (7) (including any open offers to settle), the court will have regard to the obligation of the parties to help the court to further the overriding objective (see rules 1.1 and r.1.3) and will take into account the nature, importance and complexity of the issues in the case. This may be of particular significance in applications for variation orders and interim variation orders or other cases where there is a risk of the costs becoming disproportionate to the amounts in dispute. The court will take a broad view of conduct for the purposes of this rule and will generally conclude that to refuse openly to negotiate reasonably and responsibly will amount to conduct in respect of which the court will consider making an order for costs. This includes in a “needs” case where the applicant litigates unreasonably resulting in the costs incurred by each party becoming disproportionate to the award made by the court. Where an order for costs is made at an interim stage the court will not usually allow any resulting liability to be reckoned as a debt in the computation of the assets.’

It is considered that this is a highly significant amendment. It reflects the decision of Francis J in WG v HG [2018] EWFC 84 where the claimant wife’s needs-based award was reduced by reference to her failure to negotiate reasonably. As noted below subsequent cases have shown that in the costs phase of proceedings departure from the no-order starting point will be much more readily adopted where a party can be shown not to have openly and reasonably negotiated. The final sentence must be carefully noted also. Where an order for costs based on misconduct is made at an interim stage the court will not ‘usually’ allow that liability to feature on the schedule of assets at the final hearing. Indeed, it is hard to conceive in what exceptional circumstances such a liability should be allowed to feature on the schedule.

28.53 A body of case law is accumulating on the amended ¶4.4. Each case emphasises the high duty placed on the parties openly to negotiate reasonably.

28.54 In MB v EB [2019] EWHC 3676 (Fam) the husband was found to have conducted the case irresponsibly and unreasonably. His only offer was made the week before the hearing and was ‘as far wide of the mark as can be imagined’: [13]. The court found that the husband’s needs, costs aside, amounted to £335,000. This was awarded in his favour. However, the husband’s unpaid costs amounted to £380,000. Although the payment of these costs was a hard need, Cohen J, applying ¶4.4, limited the costs payment to £150,000. The effect, of course, would wipe out most of the award designed to meet the husband’s needs; he would be left with net in his hands only £105,000. Alternatively, his solicitors would have a shortfall of £185,000. At [36] Cohen J concluded his judgment saying: ‘It will, of course, leave the husband in debt to his solicitors with a substantial sum owing to them. That is a matter between him and them. But, in my judgment, it is not for the wife to bankroll this litigation which I find to have been unreasonably conducted by the husband.’

28.55 In JB v DB [2020] EWHC 2301 (Fam) the court was dealing with issues concerning the implementation of a consent order. The court had made a direction that the parties were to use their best endeavours to resolve the issues, if necessary through mediation or another form of non-court dispute resolution. In accordance with that direction a meeting was arranged between counsel representing the parties. However, the day before the meeting the husband cancelled it. His new solicitor later stated that in her opinion a counsel-only conference would achieve nothing at all. The court considered that the husband had to be sanctioned to reflect his cavalier disregard of the direction as well as of the general obligation to negotiate reasonably; a costs award of £15,000 was made against him in relation to this conduct.

28.56 In OG v AG [2020] EWFC 52 the time came, relatively late in the proceedings, when the husband had made a sufficiently clear disclosure to trigger the wife’s obligation to openly negotiate reasonably. She did not do so. She continued to seek a disproportionately unequal division of the matrimonial property in reliance on the husband’s deficient disclosure. Mostyn J held:

‘30 The revised 4.4 of FPR PD28A is extremely important. It requires the parties to negotiate openly in a reasonable way. To take advantage of the husband’s delinquency to justify such an unequal division is not a reasonable way of conducting litigation. And so, the wife will herself suffer a penalty in costs for adopting such an unreasonable approach.

31. It is important that I enunciate this principle loud and clear: if, once the financial landscape is clear, you do not openly negotiate reasonably, then you will likely suffer a penalty in costs. This applies whether the case is big or small, or whether it is being decided by reference to needs or sharing. ...

93. As I have stated above, it was from 12 June 2020 that the wife was able openly to, indeed expected to, negotiate reasonably. The fact that the husband was maintaining an untrue position in relation to the ownership of AB did not absolve her from that obligation. However, her stance since then has been penal. As explained above, her open proposal has been that the husband should be heavily sanctioned over and above the competitor discount and the costs penalty. This is not reasonable and in my judgment PD 28A 4.4 clearly applies. In my judgment the figure of £328,020 should be reduced by £50,000 to reflect the wife’s unreasonable and untenable open negotiation stance. I hope that this decision will serve as a clear warning to all future litigants: if you do not negotiate reasonably you will be penalised in costs.’

28.57 These heavy costs penalties, respectively of £185,000, £15,000 and £50,000 should stand as a salutary warning to all litigants that once the financial landscape is clear they must openly and reasonably negotiate to seek to resolve the dispute. If they do not, they will likely face a heavy costs penalty.

28.58 It is a fallacy to assume that open offers will define the boundaries of the court’s decision-making process and that the court will inevitably ‘middle’ the open offers. The open offers will not necessarily influence the principal award, but they will be critically important in determining the issue of costs.

28.59 On 16 July 2019 the Government launched a consultation as to whether Calderbank offers should be made, once again, fully admissible at final financial remedy hearings. The consultation closed on 31 October 2019 and is accessible online, at https://consult.justice.gov.uk/digital-communications/treatment-of-calderbank-offers-consultation/supporting_documents/calderbankcostsconsultation.pdf. The Rule Committee is considering the responses to the consultation. The consultation document recorded at [15] that: ‘For completeness, consultees should be aware that the FPRC’s Costs Working Group unanimously rejected the introduction of any procedure equivalent to CPR 1998 Part 36 (Offers to Settle) on the basis this would be unduly complex and restrictive, and would be likely to give rise to unnecessary satellite litigation.’

Other cases on the matter that have since been published include:

Also covered under part 28 in the AAG Cloud Commentary:

Provisions common to both regimes

Stay of an award of costs

Basis of assessment: standard or indemnity

Costs for and against legally aided parties

Costs against a non-party

Costs judgment in a currency other than sterling